Home Traveling with your pet on a plane: 2021 useful tips

Traveling with your pet on a plane: 2021 useful tips 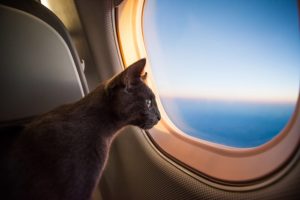 Before traveling with a pet you need to take into account a lot of things. Everything is important: from documents for a pet to the size of the carrying and time for which you need to arrive at the airport.

In this article, we have compiled airline rules and gathered some tips for dog owners and cat owners.

Where the dog will fly: in the cabin or in the luggage compartment

In the cabin of the aircraft are usually allowed to take pets, if, together with carrying, they weigh up to 17 lbs. Occasionally it can be up to 22 lbs – for example, in Alitalia.

The maximum weight and requirements for carrying see the website of the airline. Among the general rules: the size of the crate or carrier is 41–54 inches by the sum of three dimensions, it is well ventilated and securely closed, the bottom does not leak (it can be covered with a disposable baby diaper), the pet inside rises to its full height and does not rest against the head with the lid.

For dogs and cats in hand luggage, airlines usually allow both soft and hard carriers. In the cabin they are placed under the front seat. According to the rules, the pet must sit in its temporary house during the flight. Sometimes it is allowed to plant two animals in one container.

Some airlines do not allow pets to carry on if you are flying in business class: Finnair explains this by the fact that there is no room for cages under the seats.

A service dog and a guide will also fly in the cabin – even if they are lean sheepdogs. Such animals need documents about the “profession” (among others), they must be in a collar and muzzle. The owner may need a document on disability. Dogs of psychological support, depending on the rules of the airline, can fly in the cabin or in the cargo hold.

As a rule, pets in the salon take in addition to the usual place of hand luggage, and not instead. Naturally, for the money.

In some areas, the transportation of animals in hand luggage is prohibited, for example, in the UK, where the animals are sent only cargo. Similar rules are found in airlines: on the Emirates aircraft, all animals are sent to the luggage compartment.

Animals that weigh more than 17 lbs with the carrier kennel will have to be checked in. There can also send a dog aggressive breed, even if by weight it passes to the salon. See the list of best dog carriers.

The maximum weight depends on the airline: for example, American Airlines allows an in-cabin carrier kennel of up to 19 inches in length, 13 inches in width and 9 inches in height if it’s noncollapsible, larger if it’s collapsible. If your pet is heavier than it should be, you can send it as a cargo. In what other cases it may be useful, read the article on the official rules for the transport of pets.

The usual crate for transporting an animal in the luggage compartment is not suitable. In the store, the easiest way to ask is a container that fits the IATA standard, but be sure to double-check whether it matches the requirements of your airline. Here, for example, the rules for the transport of animals in JetBlue. For fighting dogs, reinforced crates may be required: so that you understand what this is about, here is their description on the Lufthansa website. For heavy dogs, it makes sense to buy wheels to the kennel, but be sure to remove them before being sent to the luggage.

Before the flight, the bottom of the cage is covered with waterproof diapers: stick it with scotch tape so that it does not slide out. Alternatively, you can use special absorbent diapers for animals. Place a blanket or blanket on top.

There are different opinions about food for animals in baggage. Many people are afraid that stomach upset will happen to the dog from stress, so they don’t feed them on the day of the flight. Others treat a small delicacy before the flight. If not sure, consult your veterinarian. Water is usually poured. To prevent it from being splashed out during loading, experienced owners ask for ice in the nearest café before being sent to the luggage compartment and put it in a drinking bowl.

How dogs and cats carry flight in the baggage compartment

On the Internet, horror stories about frost on the cells and pneumonia in dogs and cats after flying in luggage. This is nonsense: baggage compartments in which animals are transported, ventilated and heated. The climate is not resort, but at least 50 F will provide, and sometimes 77 F happens. The exact temperature depends on the model of the aircraft, it can be found in the support service of the airline. Alert owners are already on board asking the senior flight attendant to confirm that heating is turned on in the cargo hold.

But the fact that pets are nervous, and sometimes fall into a real panic in an unfamiliar place without owners is true. Many are lucky, and in the dark or dim light of the luggage compartment, their faithful friends calm down and fall asleep. In other cases, the pet, the whole flight howls, and by hook or by crook, is torn out of the cage.

In order for the dog or cat to endure the flight more easily, it is worth preparing them well in advance. For half a year, or even earlier, buy a carrier that meets the requirements of the airline, put a cozy familiar bedding and toys in it – it should become a favorite corner, not a detention cell. Let the animal get used to the cage at home.

Many people use sedatives and / or sleeping pills to transport animals in luggage. Be careful with them: on the one hand, the beast is less afraid, but on the other – no one knows how the injected substances will affect the body during overload. This is the case when it is easy to hurt, so be sure to consult your veterinarian about medications and, if possible, use proven drugs to which your pet has no adverse reactions. On a container, stick a sticker with the name of the product, the dose and time of administration.

Some veterinarians believe that it is necessary for 7–10 days to give a dog or a cat soft soothing on herbs, and not to give or prick anything on the day of the flight. Discuss the exact scheme with your doctor. 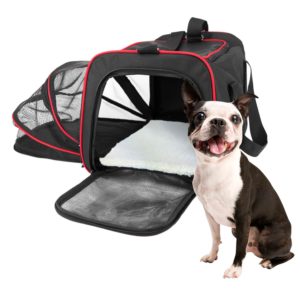 Where to go with the pet at the airport

Arrive at the airport 3-4 hours before departure in order to have time to deal with all the formalities.

At the entrance to the airport, the container is passed through a scanner, and the owner and the animal go through the frame. To a frightened beast did not run away, he must be on a leash.

First go through veterinary control. There are often queues there, and the average visit takes 30–40 minutes, or even more. If you fly abroad, for speed you can fill in the necessary certificates yourself, and only assure you on the spot. It happens that veterinary control does not work around the clock – check in advance. What documents are required for passing vetkontrolya, read the article about the official rules of travel with a pet.

Next check-in for the flight. You will check the documents on the animal, weigh it together with the carrier and send it to the cashier to pay for transportation (unless, according to the rules of the airline, they pay for animals in advance). You will then return to the front desk and get a boarding pass.

If the animal flies in the baggage compartment, then, most likely, it will be necessary to carry it to the oversized baggage reception.

On international flights, go through the customs clearance and declare the animal before landing. How to do this, read a separate article.

After arrival, pick up the animal at the point of delivery of oversized baggage or near the usual baggage carousel. If you came from another country, go through veterinary and customs control. 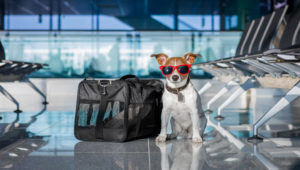 Detailed information about the rules of pets can vary greatly depending on the airline, so it is best to clarify this information directly with the operator when you are planning a trip. Here are links to the pet policy of major US airlines: 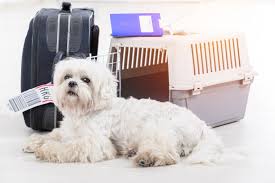 ABOUT US
Trusted Guides & Reviews of pet supplies and products. Proven products by real pet owners, who love their cats and dogs. We collect reviews and test all the pet products from food to crates and kennels, also everything in between. Our ultimate guides will help you to find the best products for your dogs and buy it.